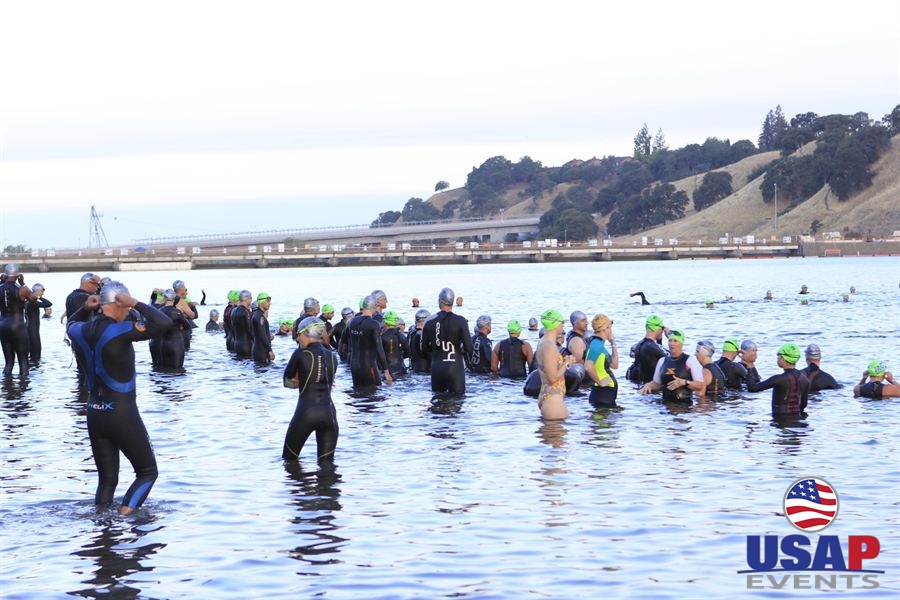 Folsom International Triathlon was located a bit further away than the last few, but we still opted to drive up the morning of. My plans for being prepared and well-rested for this race were sidelined by numerous obstacles (Two hours standing in line for the rental car I'd already reserved, a late night war against an invading ant colony in the bathroom, etc) so I had to be adaptable and just hope for the best.

I compromised by settling for almost 5 hours of sleep, but intentionally arriving an hour and a half after transition opened. I knew what this meant: last pick on transition rack location and very little time to get ready.

The transition area was packed when I arrived, but race officials were carving out spaces on crowded racks for the latecomers like me. Instead of orderly, alternating bike positions, every single person had faced their bike towards the Bike Exit, creating a jammed mess of handlebars. Athletes had staked out giant transition spaces with what looked like picnic blankets and a week's worth of camping gear. I slipped my bike into the three inch gap between two campsites while the announcer on the loudspeaker interviewed the feature Elite triathlete of the day, Robin Pomeroy. I was familiar with Robin and her skills -- in particular, her swim skills. I knew I had my work cut out for me, and the bike and run were going to be all about undoing whatever damage she was about to do in the water!

My late arrival meant that my only warm up was a quick few minutes of swimming, but I was feeling good at the starting line. My biggest challenge with the swim is making it feel like a race. I can't see a pace clock or my heart rate monitor, and it's hard to gauge my speed based on the speeds of other anonymous swimmers around me. I often catch myself having too much fun out there in the middle of the lake, and not really focusing on Work.

As luck would have it, I landed right on the feet of the perfect draft. She was just slightly faster than me, but with the advantage of tucking in behind her slipstream, I was able to push just enough to hang on to her swift pace. I was laser-focused on swimming strong and keeping her bubbles in view, and before I knew it, we were rounding the final buoy towards the finish.

And it turns out, it WAS my quickest swim ever. Open water splits are hard to compare since there are so many variables with water conditions, course measurement, and placement of the timing mats. But this was definitely my fastest 1500 meter swim in eleven years of competition, by a full minute! I like to think it has something to do with increasing my training from three to five swim days per week, but it was probably more due to tactical maneuvering this time. Hey, I'll take it!

Transition was quick and I zipped out to the bike course to see how many dudes I could catch. Robin was up ahead somewhere, but I wasn't likely to see her until the run. I passed a few guys but for the most part, it was pretty lonely out there. With so many turns I lost track of which direction I was going, but I noted with irritation that the wind seemed to be pummeling my face no matter how many turns I took. After getting beaten up in the headwind for awhile, a guy blew past me at top speed, and then promptly slowed down as he pulled in front.

I had passed him early on, just out of transition, so I figured he must have been enjoying my draft for quite awhile.