As luck would have it, our house in Corvallis, Oregon, was right in the path! Corvallis is a small, college town (home of Oregon State University) between the larger cities of Portland and Eugene, Oregon. For this eclipse, however, Portland was too far north and Eugene too far south, but Corvallis happened to be just right. Summers in Oregon are always beautiful, and the chance to watch this Total Solar Eclipse was a perfect place at a perfect time of the year.

A mile to the east of us, Oregon State University hosted a viewing party at the intramural sports field, and a half-mile to the west, the county hosted a viewing party at the county fairgrounds. We (and a few dozen other locals) chose instead an open field between the two. This was accessible only by a hiking/cycling trail and offered a broad view of the horizon so we could get the "360-degree twilight" experience.

In order to experience the full effect of the spectacle, we walked to a nearby field with an unobstructed view of the sky and horizon in every direction. This is is a 360-degree panorama of our viewing location.
I took photos of the 1979 eclipse, the last previous total solar eclipse visible from the continental United States. Since it clipped only the northwest United States and was surrounded by winter storms, not that many people got to watch it.

In contrast, the 2017 eclipse would be watched by millions and many would be taking photos better than I could, so this time around I was content to just sit back and enjoy the spectacle.

However, I did take along my mini-DV camcorder to record the ambience:


My video of the August 21 solar eclipse, as viewed from Corvallis, Oregon.
We hosted about a dozen friends and family, including Whitney, who is an alumna of Oregon State University but now lives in Hawaii. 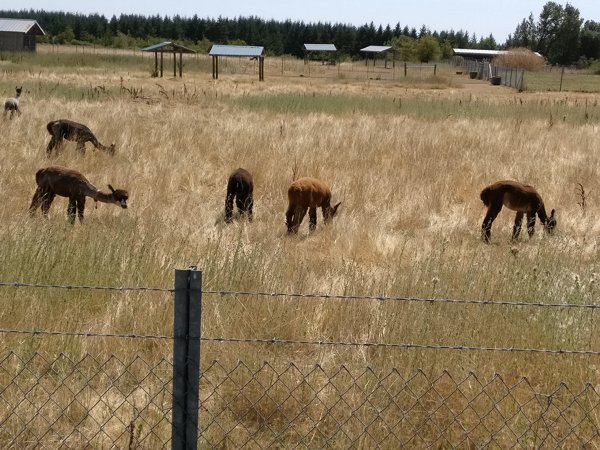 Our viewing location was shared by a herd of llamas in a neighboring field.

Nik, Kim and Brad traveled north from Colorado to watch the event from a campground at Glendo Reservoir in eastern Wyoming.
Posted by Dan 08/29/2017, revised 09/06/2017 by Dan