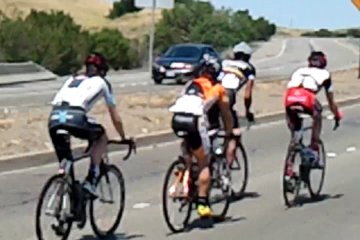 (click photo for video)
At this point the riders were about halfway through the 115-mile Stage. Four riders had broken away from the peloton and had nearly an 8-minute lead on the rest of the pack. (The peloton would catch up to them about 30 miles later, out on Byron Road in the Central Valley.)

It was thrilling to watch them go by as they started up the hill, followed by a half-dozen chase cars with very expensive spare bikes on top. A little more than 7 minutes later the horde of riders in the peloton arrived, followed by a veritable army of support vehicles!