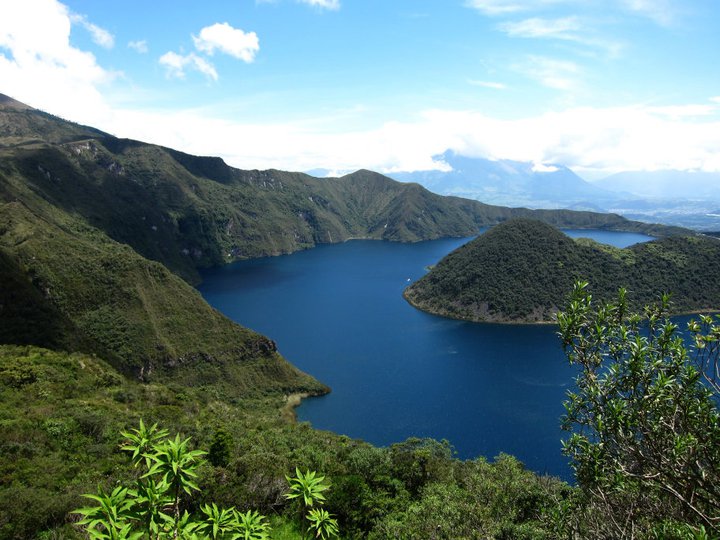 This is the lake, high in the Andes under the beautiful sun! Our camping spot was at the highest point on the ridge, at the left of the photo.

I came to this country with barely a handful of Spanish to my name, but it's about time I learn to speak in a language other than English! The entire weekend was an opportunity for me to listen listen listen. I don't know enough yet to be able to follow what was being thrown back and forth in the fast-paced, slang-heavy conversations, but nevertheless, it was great to be surrounded by Spanish for two straight days. Most of the people in the group knew some English, so when it was necessary to communicate with one another, it was possible. But for the most part, I was a silent observer, asking "Como se dice ___?" and "Que significa ___?" in the times that I would break into conversation and attempt to practice speaking en espanol.

Needless to say, I was not only an observer of the language, but of the culture. One of the main things that was very apparent this weekend was the pace and urgency (or lack thereof) in the Ecuadorian lifestyle. I knew to be aware of this when coming to Latin America, and this trip was a great practical introduction to this aspect of the culture.

The plan was to leave at 8:30 Saturday morning... 2 1/2 hours later, we finally have the two cars of 8 people together and ready for takeoff. After a few hours' drive and an afternoon of sweaty hiking, we made it to our camping destination at the highest point on the ridge, high above the lake. It was about 5:30 in the evening, but the evening did not follow the standard "set up tent, get food to belly" style of backpacking that I'm used to. Once we got to our destination, we sat around for about 40 minutes, gazing out at the scenery and the coming sunset. Eventually, the group moved to set up the tents - a process that was not driven by any show of who could set up tents the fastest. After about 20 minutes of chatting and laughing, nonchalantly piecing together poles and pounding down stakes, we finally had our shelter. 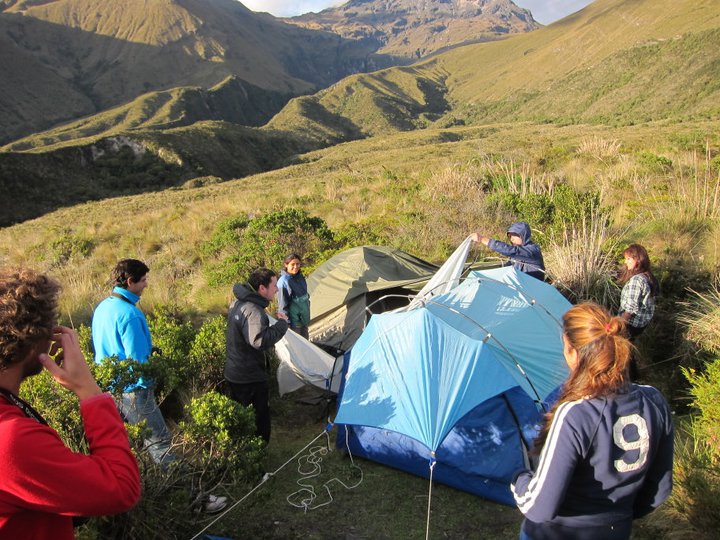 Setting up camp, with Volcan Cotacachi rising up in the background

Next, food! Right? Eeeeventually, yeah. We got a fire going (despite the serious lack of what any Oregonian would consider firewood) and the homemade chili that was brought along for the group finally made it to our stomachs about an hour or two later. And what excellent chili it was! Chili, avocado, little baby potatoes, cheese, salsa, and crackers... fantastic! With full bellies and some bottles of rum, we continued the night with gazing over the moonlit Andes and more jovial laughing and chatting. One thing's clear - Ecuadorians like to enjoy their time! Good-natured, relaxed, and full of smiles, they do not seem to be easily thrown off their style.

The pace of the next day was nothing different: 2 or 3 hours of sitting around, eating breakfast and packing up gear, continuing the circuit around the lake back to the cars, and then meandering back to Quito, where one exhausted, happy Whitney showered and plopped into bed for the best night's sleep yet!

NOTE: I did not bother to spend words in this entry on the beauty of the lake and the scenery, because pictures say it better. So go check out my photo album. 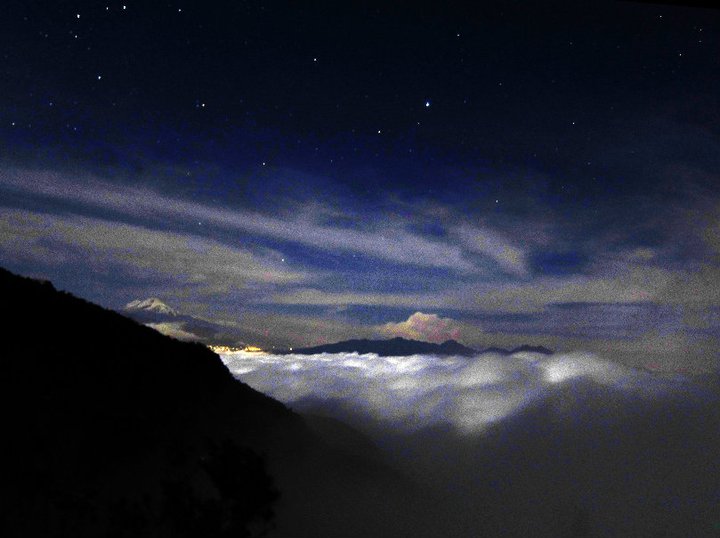 Moonlight on the Andes