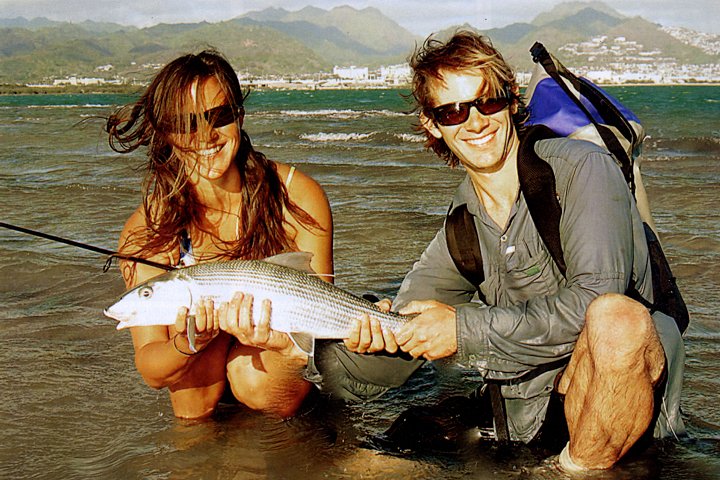 It seems like almost everybody around here has a "Tail Tale" or two to tell, but until about a month ago, this wahine didn't. All I had on my fishing resume was a morning at a reservoir with my grandpa, back when the top of my head barely reached his hip. I remember we used bright orange bait that reminded me of Play-Doh®, and I sang "99 Bottles of Beer on the Wall" all the way through... three times. Poor grandpa.

On that morning, the guy sporting the plumber's crack next to us on the dock hooked a stocked trout, and let me reel it in. But in 26 years of my life, I had never felt the pure excitement of the tug on the line and the whirlwind fight that follows. Fortunately, I am now blessed to live a stone's throw from the waters of the Pacific, with fish-loving friends ready and willing to share their passion.

On the windy afternoon of February 3, I had a friend visiting from the mainland, and being the fishing enthusiast that he is, what else would he rather do on his first day in the islands than fish?

My good friend Alex Filous was generous enough to take Shawn and me out for some bonefishing on Triangle Flats near Sand Island. Alex gave me the low-down on what to look for, how to cast, and what to do when I felt that tug. After a little lesson, it was time to put some bait in the water and hope for some 'o'io!

The incoming tide was still low, so while we waited for more water on the flat, we blind-cast off the edge and hoped for bones. With my line out and the sun on my back, I hung out and basked in the simple pleasures of the day while Alex and Shawn checked out another part of the flat. Not 10 minutes had passed when I felt the rod jerk forward. And just as Alex had described in our debriefing, a few more tugs followed and I knew a fish was on!

Following the wise words of my fishing sensei, I pulled on that rod, set the hook, and it was game on. That fish took off, unseen beneath the wind-chopped surface off the edge of the flat.

And just as quickly, Alex came bounding and splashing across the flat to my assistance in such a determined frenzy that I couldn't help but feel the same sense of white excitement. Were it not for his quick action to keep the line from getting caught under corals and rocks, I would not have this tale to tell.

With the treacherous edge of the flat cleared, I reeled that bone in, and what a beauty it was! Shimmering silver and green, the 24-incher was tagged with #11050 for the 'O'io Tagging Project, and after a bit of a photo-op with a stoked first-time fisher, was returned back to the waters to go on its merry way.

Your first bonefish--it only happens once. #11050 got me hooked, so I'll be back out there soon!


(Reprinted from the print edition of "Hawaii Fishing News" magazine.)