To get to their house, I took the very impressive transit system from the bus terminal - the first place I've been with good public transport linked to where the buses come in! I didn't have to pay $10 in a cab to get to somewhere useful! Took the spacious, clean metro to a transfer station where I switched to a 'cable car' route in which I sat with 5 other people in a little cage on a cable that went up up up the flanks of the mountains. Then I switched to another cable route that carried me for many kilometers over the treetops of a huge natural park at the top of the mountain. I gazed at butterflies and birds and trails among the trees for about 10 minutes, flying above it all. It was great. Their house is in a cute little town perched on top of the mountain, and I've got my own room and feel perfectly fine passing the afternoon reading on the front patio with a cuppa coffee. 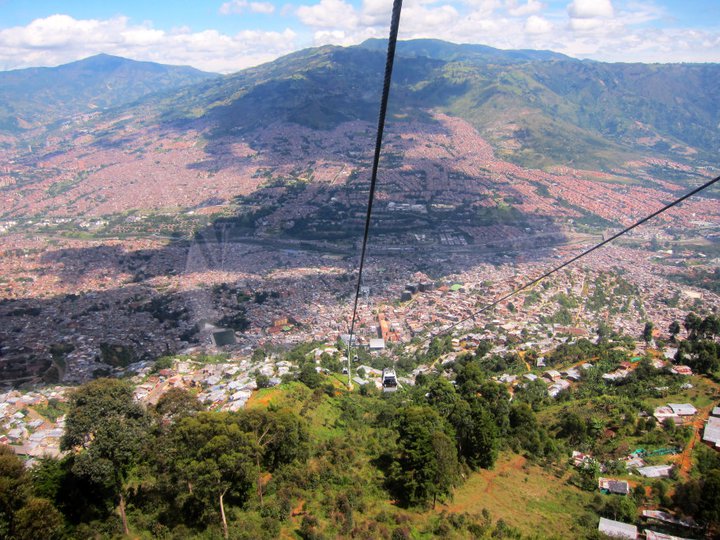 Metro-cable up the flanks of the mountains, above Medellin Today I went down into the city to wander. It was cool. Looked at a lot of fat-people sculptures and went to an independent cinema where I watched a Colombian movie that was very strange. I didn't really understand it, but I think even if it was in English, it wouldn't have really made sense to me.

Haven't been feeling very hungry lately, and my energy has been very low as a result. Today while I was wandering, I knew I needed to eat something but there was really nothing in the world that I could think of that sounded appetizing. The closest I could dream of that sounded decent was American Dream pizza. So I committed to a pizza. Wasn't very good, but it gave me enough energy for the day (along with a few fresh-squeezed juices, which are everywhere and extremely delicious), but I really hope I feel more of an appetite soon. I don't like feeling tired all the time.