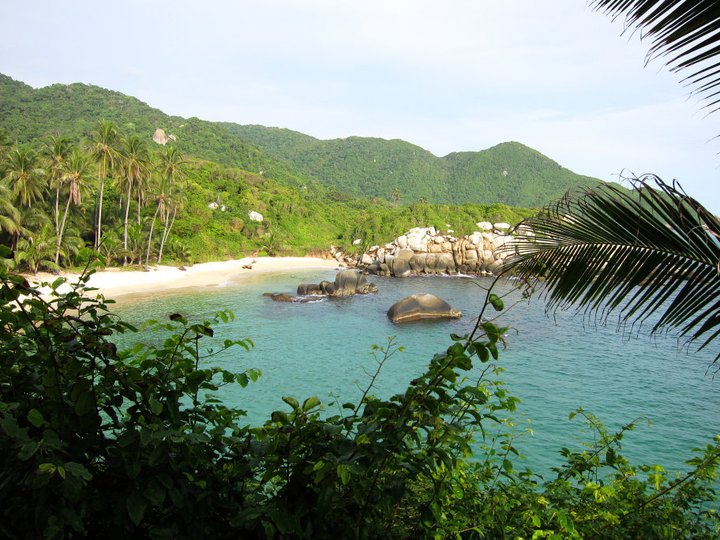 Tayrona National Park - this is the view from where I slept

My body has spent the past 5 days or so fighting some kind of head cold that I think is just a lashing at me for how I've been putting this body of mine to the test - irregular sleep schedules, about 1/3 of my nights spent on buses instead of in beds, bla bla bla. But I keep telling it, "We're still young! Deal with it!"

I think I would've kicked it by now, except that my days in the national park (which should've been the key recovery days) were characterized by yet more "deal with it" actions against my body: accommodation was much more expensive than I expected, and I only had a certain amount of money with me, so food expenses got cut. The restaurant was also super-expensive, so I have been averaging about 1 meal per day for the past 4 or 5 days. It's been fine, since I haven't had much appetite due to my cold anyway, but I definitely felt like the last day or so was kind of a hazy delusional fog of no fuel in the system.

When I tried to leave the park this morning, I tried for a different path than how I came in - a 4 hour hike through lush green forest, past some old ruins from a civilization that lived there from the years 450-1600 or so. It was a VERY sweaty 4 hours - 2 hours up up up up, with no breeze, and then 2 hours down down down... I hadn't gotten breakfast, as I figured I could just hold out for a meal back in town. You can imagine my disappointment when at 1:30pm, soaked and deliriously under-powered, I emerged out onto the same exact beach I'd left 4 hours earlier. What??? I have no idea what happened. Who puts a loop into an exit trail?? Anyway, I threw down for a delightfully refreshing fresh-squeezed orange juice, and then powered my way out the original way (only 1.5 hours at my determined pace).

Tomorrow, I think I'll head northeast along the coast toward Punta Gallinas, which is the tip of the continent. I hear there are great beaches, and it's quite a trek out there, so it doesn't get the volume of tourists that this area does. Also cool about this place... on one side is gorgeous ocean, on the other side: DESERT! Ha. And giant sand dunes. Anyway, we'll see if I can get out there. I'll give it my best.