A week in Thailand. Time for a blog.

Nik and I had no problems meeting up at the Bangkok airport, try as I might to miss my plane... we found eachother at 8am Bangkok time, I think 2am my time (coming from France), and 6pm Nik's time (coming from California). Despite coming from opposite time zones, neither of us had any problem adjusting to our new time. One night of early sleep, and we were settled. Sweet.

So anyway, our trip started off at full pace. Thursday morning, we went from the airport to our Couchsurfer's place, dropped our stuff, and hopped on a river boat. We were off to the Grand Palace, a ridiculously intricate and ornate conglomeration of jeweled buildings. It was the sparkliest place I think I've ever been. We also saw the reclining Buddha, which is a ginormous gold rendition of a Buddha that they put it a temple that juuust big enough for the Big Buddha (heh) and a little walkway for visitors to squeeze around. Makes it difficult to take any pictures of the thing - he just doesn't fit in the frame. 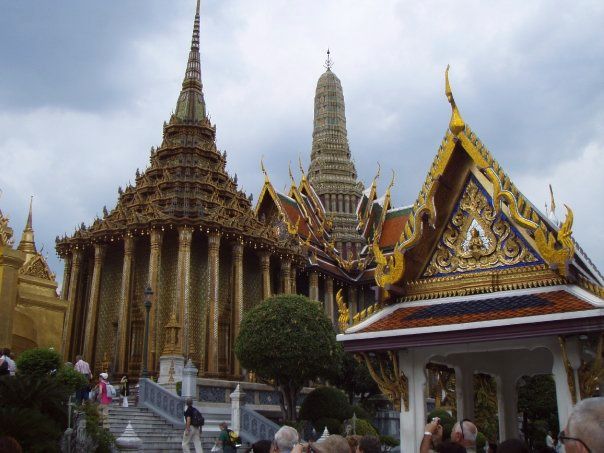 The Grand Palace - talk about bling!

After taking in all the gold we could, we caught a tuk-tuk (those little 3-wheel motor carts with a bench in the back) to Khao San Road. Khao San is backbacker central, and it's where all the action is. Street vendors selling cheap goods, street vendors selling cheap (and dilicious!) food, bars, pubs, clubs, and shops of all kinds, not to mention the constant bustle of people from all corners of the world wandering about. Here, Nik and I got our first Thai cuisine... from a street cart. It was amazing. 40 baht (about $1.30) for a full plate of rice and whatever dishes you decide to plop on top of it. We loaded up our plates and sat down for a good sweat! Yay for Thai spice! Finally! (Australia had a serious lack of spice) We had our food and then stopped at a bar for a couple beers, on Aunt Paula. Thanks Paula! We had our beers, and then turned in for an early night. It had been a full first day!

Day 2 would prove to be full of even grander adventures! Our Couchsurfing host Paul and his girlfriend were heading out of town for the day to do some sightseeing of their own, and they invited us along. A 2-hour bus ride later, we were sitting in a riverside restaurant, eating lunch, overlooking some famous WWII bridge in Kanchanaburi. This was then followed by some scooter fun! We rented motorbikes and scooted around the countryside, making our way to a little place off the road where we got to pet tigers. Yay! I got to play with the kitties! Small ones, big ones, they were all so cute, I just wanted to wrastle with 'em! After our feline stop, we scooted off to Erawan Waterfalls, a series of 7 beautiful post-card-worthy waterfalls. So that was fun, we took pictures so you could all be jealous. 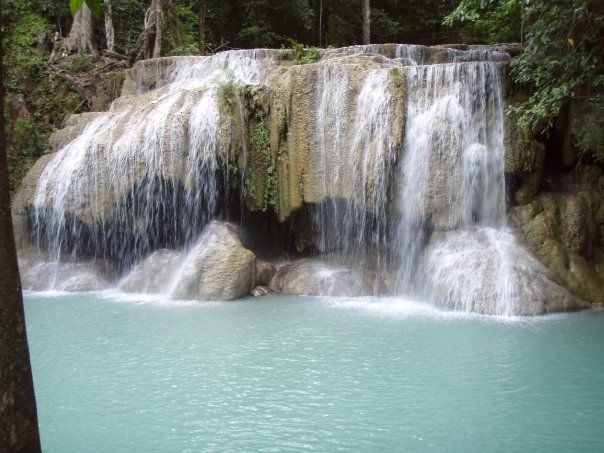 Are you jealous yet?

On the weekend, we hit up Chatuchak Market, and MASSIVE weekend event in Bangkok where you can find anything and everything for about 1/6 the price it would be in the US. Everything. Clothing, food, accessories, books, backpacks, shoes, live animals... everything. To give you an idea of how huge this market is, Nik and I arrived at 11am and stayed until 5pm... and we browsed maybe 40% of the market. To be fair, you don't really need to browse as much as we did, though, because within a "genre" all the vendors sell pretty much the same stuff, so you don't really need to look at it all. But here's my advice to anyone planning on traveling to Thailand: DON'T TAKE ANYTHING! Seriously, just take one change of clothes and a toothbrush, arrive on a weekend, and buy EVERYTHING YOU NEED (including a backpack) at the market. You can buy a North Face backpack at the market, fill it up, and go from there. You could sell the pack in the States for at least double what you bought if for, and earn back all your initial investment right there.

Sunday, Nik and I attempted to meet up with hashers (a group of people in cities around the world that get together, drink beer, and run. Hard to explain, but cool people), but the gathering was apparently cancelled, 'cause we didn't find anybody. So we ran home instead of taking the Underground, just to fulfill the running aspect. People were confused by the crazy Westerners that were running past plenty of good taxis for no apparent reason.

Monday/Tuesday: They blend together. We caught an overnight bus out of Bangkok, headed for the islands. The bus left Bangkok at 6pm, and dropped us somewhere at 5am. The next 6 hours were then a mash of tranfers, waiting around, being put on another bus, waiting around at another place, being put on a boat, stopping at this island and that, getting to our island, finding a taxi, finding a bungalow, and CRASHING. Hard. We found our bungalow in Haad Chao Phao (beach) on Koh Phagnan (island) and immediately passed out on the bed. We slept from 3pm Tuesday until 8am Wednesday. It was bliss.

So now we're on Koh Phagnan, enjoying the island life, just relaxing and continuing to eat amazing food. I'll have plenty more pictures to make you all jealous, but I'll save the island life for the next blog. 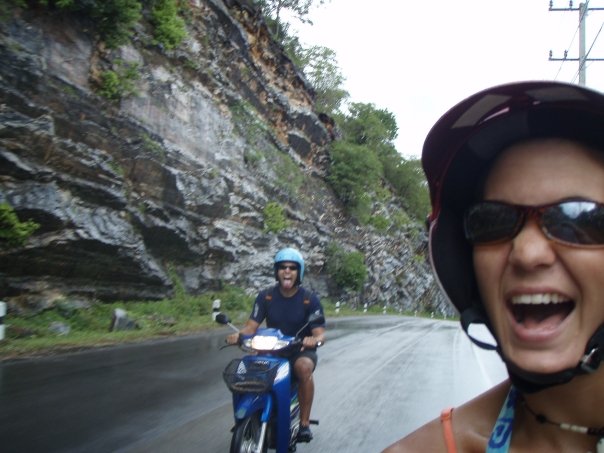 Cruisin' through Thailand on our scooters!