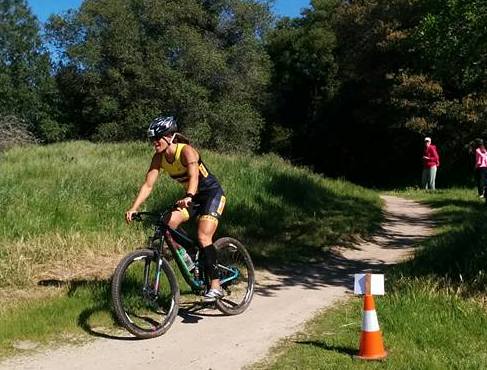 Why on earth would I do that?

Other than just morbid curiosity, perhaps I felt compelled to kick off my 2016 season with the XTERRA Granite Bay Off Road Triathlon because I figured if my little brother can mountain bike, then probably I can too. Over the years, my younger siblings have displayed natural cycling and running athleticism and I've come to think of them basically as optimized versions of myself. My brother has won various mountain bike awards and based on his limited updates, I get the idea he and his bike pretty much spend all their time in Moab.

What's so great about mountain biking? I had to know.

I started renting a demo bike from Trailhead Cyclery, attempting to teach myself how to bunny hop and shred. Next, I checked in with my resident MTB guru to find out his secrets. What skills defined an excellent mountain biker? Little brother cited his "total disregard for personal safety," as one of his best assets.

Crap. That one is nowhere near the top of my list of personal traits. I don't think it's even on the list anymore. My youthful invincibility ended abruptly on the softball field one summer day ten years ago when an ill-conceived slide left me captive inside a plaster leg cast for 8 long weeks. NEVER AGAIN.

The popular refrain embedded in all mountain biking advice I received was, "When you go down -- and you will go down ... "

No way I could perhaps negotiate around that requirement?

I had very little familiarity with the course in Granite Bay. I read about "swoopy trails" and a variety of conditions including sand, dirt, rock, etc. It was two 8 mile loops for the bike, with less than 400′ of climbing on each, and that sounded pretty reasonable.

Honestly, I was most concerned about the swim. I had heard rumors that Folsom Lake was snow runoff, and therefore extremely cold this time of year. At just a half mile, the swim would be quick, but very unpleasant.

It turns out, I had nothing to worry about.

... At least as far as the swim was concerned.

The water temperature was just fine, almost comfortable, even. The short swim was complete in just over ten minutes, and transition was smooth, my new XTERRA wetsuit melted right off my legs like hot butter.