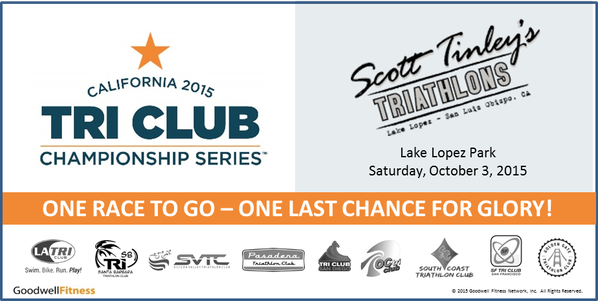 Scott Tinley's Long Course was my final, final season finale. Yes, I know I'm supposed to be done racing for the year, but this one was non-negotiable because I had a specific agenda:

The contest is in its inaugural year, and the two main objectives are to score club points and to score individual points. With one event left to go, the Silicon Valley Tri Club was in a tight race with Triathlon Club San Diego and Golden Gate Triathlon Club, and we needed as many racers as possible to show up in San Luis Obispo to secure the win. I took this assignment very seriously.

Additionally, in the competition for individual points, I was in the top three, and the stakes were high: the first place prize was a Fitness Adventure sponsored by Goodwell Fitness and Alaska Airlines. This included round-trip airline tickets for two, a two night hotel stay, and a race entry fee at the destination of your choice (U.S. & Mexico). Holy crap! A dream come true!

This was a no brainer. Injured or not, I needed to be at this final race in the series. Scott Tinley's offers Sprint, Olympic and Long, with higher TCCS point values assigned to the longer distances. Long Course it is!

I combined forces with fellow SVTC racer (and club president) Carin, and last minute accommodations were hastily booked at a "budget level" motel in Arroyo Grande, just 20 minutes from the race venue at Lopez Lake.

The decor wasn't really my style, but at least the lampshades were still in the package. Nothing worse than a stale lampshade.