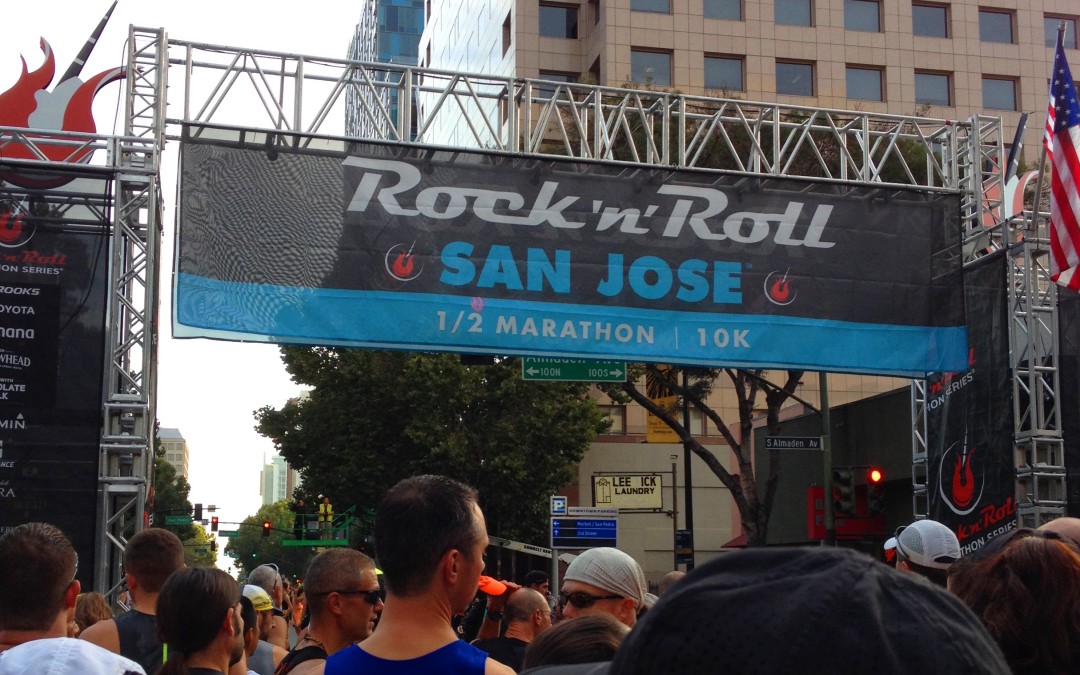 With the end of September comes the annual San Jose Rock 'n' Roll Half Marathon. I've been excited for this race both as a coach and as an athlete.

Out of town friends Meg and Jack were coming up for the race, and it would be Meg's first half marathon. I had been working with Meg on her run training for the past 5 months, and we had seen her long runs go from 2 miles to 11 miles, a thrilling transformation! This would be the culmination of half a year's work, and I looked forward to watching her cross the finish line.

Additionally, I was excited for my own run, since this is a guaranteed PR course. The weather is typically mild, the race well supported, and the route is pancake flat, save for two underpasses. I ran 1:28 at Santa Cruz just a few weeks back, surely I was destined for a 1:25 on this course that featured zero miles of sand running and a significantly shorter pre-race bike ride.

I guess this PR fantasy was rooted in the expectation that I would peak for Santa Cruz ... and then just stay there forever. But this belief undermines the concept of a Fitness Peak. A "peak," meaning you come back down the other side at some point (in my case -- about 30 minutes after completing my "A" Race).

Apparently, the universe determined (quite accurately) that I don't know when the party's over. The off season -- like a good night's sleep -- is healthy and necessary, but left to my own devices I was going to keep adding just one more! one more! one more! race to my schedule

So I got injured.

It happened just after my Santa Cruz finish. I pushed hard at that race, and certainly had a collection of noteworthy aches and pains afterwards. Curiously, the knees were not included in that list. Nor have they ever been during racing or training. However, I sustained a fresh new knee injury while being interviewed for a post-race massage. The therapist asked me to straighten my leg, which I fearlessly complied with, and BAM! Instant knee injury.

What makes this all even more mysterious is that since the traumatic massage interview, I have discovered that I can still bike, climb stairs, jump, barbell squat, dart side-to-side in a game of puppy keep-away, and in fact I can actually jog and run. I can straighten my legs, and I was even interviewed for another massage without incident. There is just one specific movement that my knee refuses to allow:

Unfortunately, this was the single activity I had planned to engage in for Rock 'n' Roll.