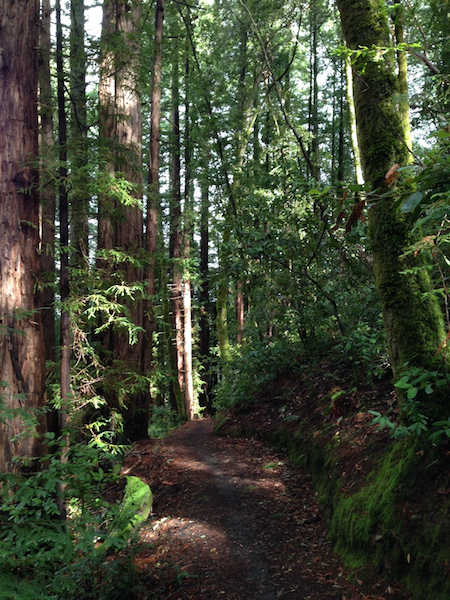 Today's Lesson: Not all trail runs are created equal.

When I signed up for Wildflower Long Course, Karin Langer advised, "Better trail run your ass off!" So I've been doing just that.

I broke the seal on trail races last month with the Woodside King's Mountain Half. It went alright, all things considered. I was just coming down with a cold, so my energy was low and my heart rate was running 10-20 bpm higher than usual (Just don't run when you're sick. It's dumb. I promise I paid the price for my presumptuousness in the week that followed ... ) This meant that I had to walk more than usual just to reign in my sky-rocketing heart rate. The course was a steady, gradual climb 1,880 feet up to the 6.5 mile turnaround point. After that, I just tucked my legs up underneath me and effortlessly careened back down the mountain like a winged unicorn until mile 12, where I rolled my ankle and limped the final mile on raw adrenaline, hoping to beat the onset of swelling.

I finished in a respectable 1:37, which was good enough for 4th female overall.

Today's race was the King Richard Annual Half Marathon, and I figured that now that I was in good health and had my mischievous ankle swaddled, there was no way I couldn't snag a PR!

As we crowded the starting line, the race director warned us that this course "Packs a punch" and once we got a taste of it, we would certainly wonder what we'd gotten ourselves into!

"Oh, and watch out for rattlesnakes," he casually added.