This one, my friends, is about last weekend's folk festival. While Townsville is a renowned red-neck town, there is a hidden hippie culture... and I found them at the Palm Creek Folk Festival!! The festival was last weekend, Fri-Mon, on an eco-tourism area about 40 mins out of town. It's at the base of the the Great Dividing Range mountains, right next to national park. In short: beautiful place.

I went with my good friends Andrew and Hugo, and Hugo's friend Zoe. We went on Saturday evening, and listened to music, ate great food, met great people, had an awesome time camping, and just generally enjoyed the whole atmosphere. It felt so nice to get away and finally see live music again. It was also really nice to see this crowd of people, because this culture is hidden away in Townsville, drowned out my the red-necks driving by in their shiny utes (those car-truck things), honking their horns and yelling out the window at bike-ists. But anyway, yeah, we had a great time and I was so happy to semi-satisfy my yearning for live music. All of the acts were little local bands, but there was some really great music! Let's face it: Live Music is Better. 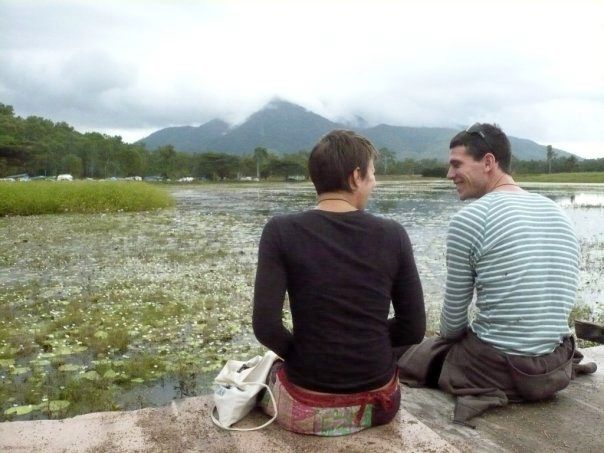 Me and friend Andrew, enjoying the beauty of our surroundings on Sunday afternoon, with the sounds of folk music coming from the stages behind us.

We stayed until Monday morning, when we hitched back early so that I could get back to town in time to leave for a different camping trip... which is the topic of my next adventure! Read the next story to learn more...

As my camera is broken and I don't have my own pictures from the weekend, I've provided a link to Hugo's photo album of the trip. Unfortunately he doesn't provide captions, so there's no indication of who's who (unless you're logged into Facebook). But there's not much necessary commentary anyway: it was a beautiful location, Andrew's got the dark hair, Hugo the light hair, Zoe's the girl :)

Just an interesting side note: Andrew and Hugo are 2 of the guys that live at the house I Couchsurfed at my very first day in Townsville, before I found a place to live. I mentioned them in one of my very first blog entries - they were the first people I met in Townsville, and they are now some of my closest friends. I just think that's so cool the way that worked out, thought I'd share :)