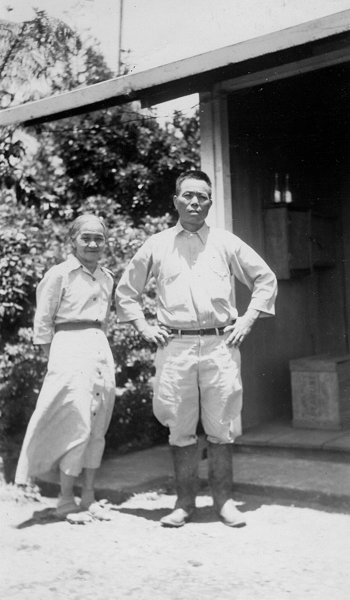 My grandparents in front of their home, c.1940.
My grandfather worked for the Hakalau Sugar Cane Plantation, and in those days, workers lived in small plantation-built "camps" of around 6-10 bungalows each, scattered amidst the cane fields in which they worked. But the camps were all torn down when the plantations closed in the middle of the last century, and the land has essentially sat, devoid of structures for more than a half century. I'd have to figure out where her house used to be by going from her memory of the terrain.

Fortunately, that turned out to not be as difficult as I thought.

Although they lived 2 miles up the mountain from the public road, they were near some landmarks that were easy enough to find with the help of Google Earth. They were near a bridge across the Nanue Stream, there is only one bridge across that stream, and it's still there!

Closing her eyes, Mom was able to meticulously describe the 2-mile uphill trek she made every day, returning home from school. She described each bend in the road, and where it rose steeply and where it leveled out. As she reminisced, I was amazed I could find a match to her descriptions on Google Earth--moreso if I tilted the view to a 3D display so I could follow along with the ups and downs of the terrain she was describing. 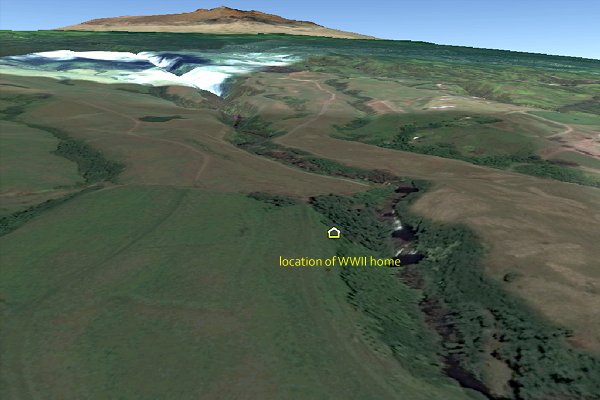 Google Earth 3D view of where my mother's childhood home used to be, with Mauna Kea rising in the distance.
Mom was able to describe the bridge, roads, swimming holes, and even an unusual "double-waterfall" behind her house. She was able to describe where stables and the other homes were in the long-gone camp. 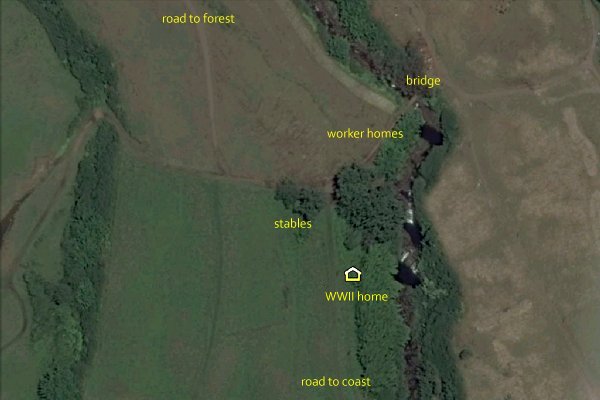 It's possible vegetation might not grow as readily over the old road traces, making them more apparent in aerial views than they might be from ground level. As it happens, my grandfather was a "luna" (foreman) who led a plantation crew that "paved" the plantation roads with rocks quarried from the river, to help them withstand the muddy, rainy seasons. The faint traces still visible in satellite photos after all these years may be because he was good at his job! 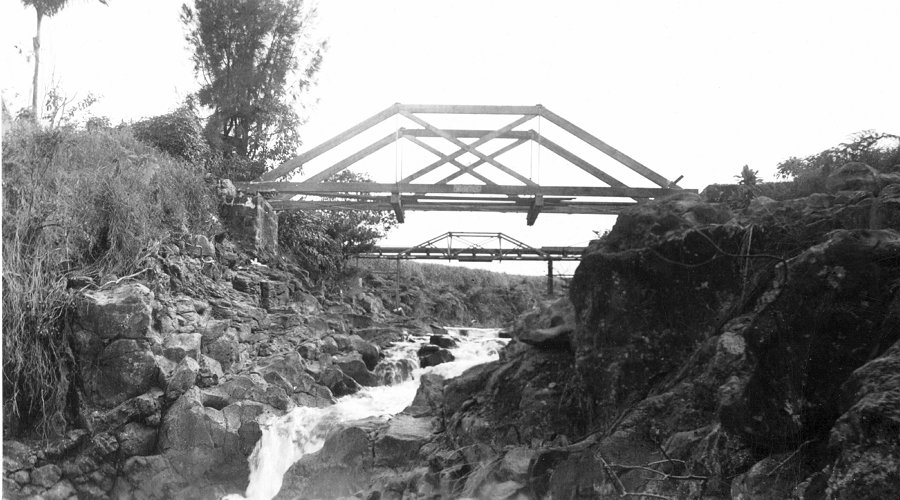 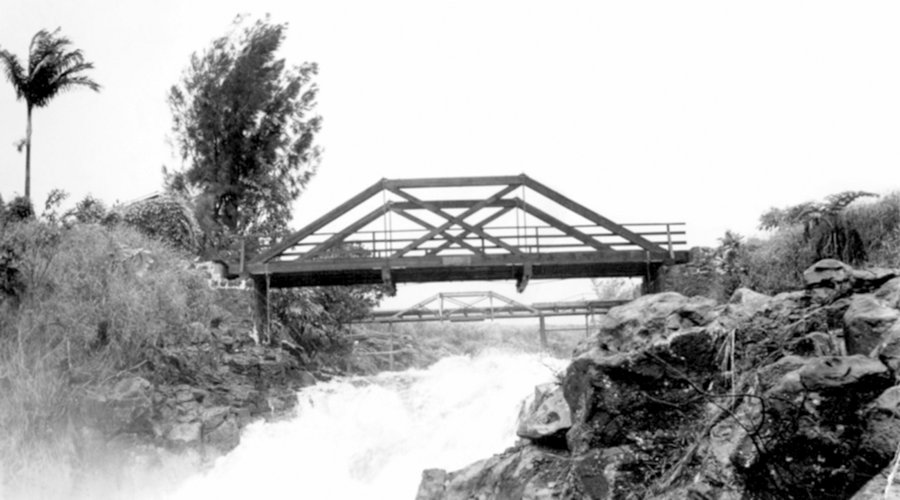 These two photos show the Nanue Stream bridge under construction in the summer of 1940. The size of the stream would change dramatically depending on the storms crossing the mountain slopes. The second bridge in the background is a crossing for a sugar cane flume. 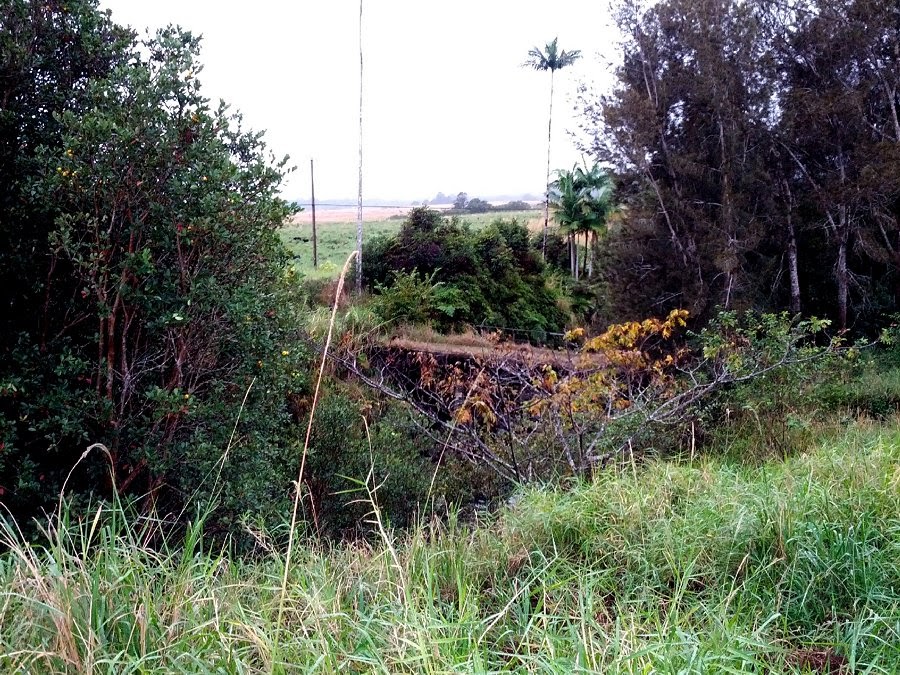 I was able to make my way to the old bridge from the north (the right side in the Google Earth photos above). Here is the bridge as it looks today. 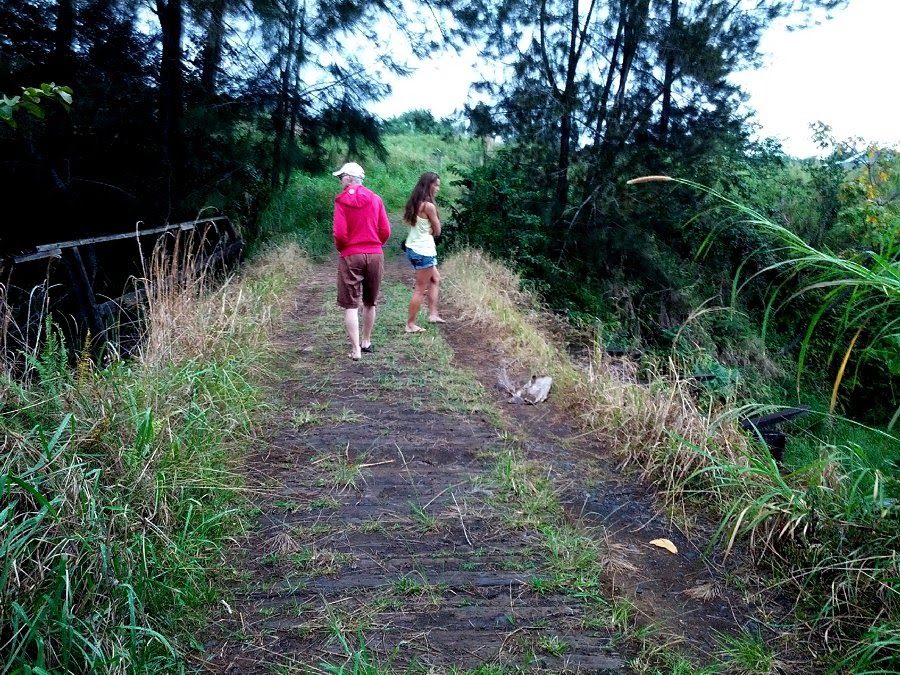 Lucy and Whitney examining the surface of the old bridge. 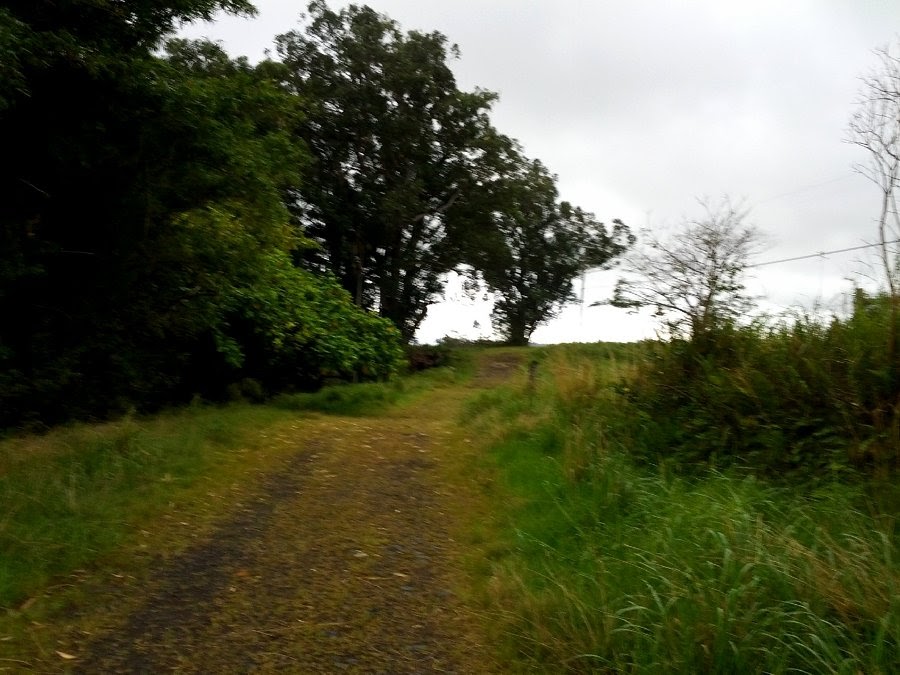 View south from the bridge. This path would have been lined with several small houses for plantation workers. My grandparents' house would have been around the trees to the left. A locked gate at the south end of the bridge barred me from exploring further. 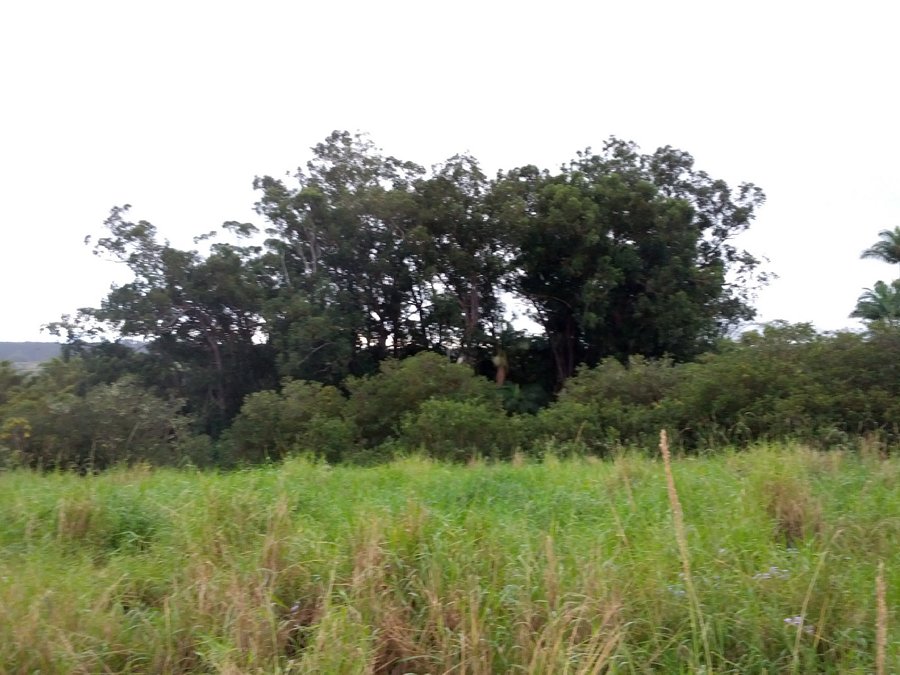 In this view from the north side of the stream, the bridge is off camera to the right and the stream is in a gully amidst the trees. The tall trees are on the far side of the stream. During WWII my grandparents' home would have been near the left edge of the tall trees.
Posted by Dan 01/15/2015, revised 01/18/2017 by Dan